Intro to Chemistry and Physics Index
Physics Index
Concepts of Motion
A large part of physics is the study of motion. Because words related to motion are very specific, it is worthwhile to examine them closely.
At the most basic level, motion involves something moving. The thing moving might be a person, a car, a horse, a plane, a train, an electron, a planet, a moon, a galaxy, a… it could be anything that moves, even an imaginary point such as "where the arrow points."

Often whatever is being examined or studied or looked at is generalized to be called an object. Instead of saying "a girl runs…" it could be said "an object moves…"

The location of an object is called its position. How an object changes position over time is generally the purpose of a study of motion.

position: the location of an object

With an understanding of object and position, it is possible to come up with a definition of motion:

motion: when an object changes position

If the idea of changing position is examined, three more specific ideas emerge. However, it is necessary to first look at another idea that will help make the ideas about changing position less complex.
The idea is that observing motion means that something starts and ends. As one example, you might want to think about how long it takes to go from home to school. You would look at the changes that occur between the time that you leave home until the time you get to school. This period of observation can be, for convenience, be called an event. Thus, motion could be discussed as what happens to an object's position during an event.
Returning to the concept of position, then, the understanding of the idea of events make the following definitions easier to phrase:

initial position: the location of the object at the beginning of an event.

Consider this description of a motion event:

A train leaves the station at 7:00 a.m. and heads down the track at 50 miles per hour. How far would the train have traveled after 3 hours? The next station is 350 miles away. How long would it take to reach the next station.


Based on the description, there are three pieces of position information:


NOTES:
Positions are places. Sometimes these places are described in relationship to other things, like 10 meters from a mark or 4 miles from a bridge. Positions are not distances.
Distances (to be discussed next) have some measure and units, like 10 miles or 40 mm.

The next concepts to consider are distance and displacement. Neither of these are particularly difficult to understand, but they are very specific and need to be considered very exactly.

distance or distance traveled or distance moved: the measure of the length of the path an object takes as it moves between an initial position and a final position

"Distance is the curvy line."

displacement: the measure of the length of a line lying directly between the initial position and a final position of an object that moved.

"Displacement is the straight line."…distance and displacement answers questions like "How far did it move?"

where ∆d is the change in distance/displacement and df is the final distance and di is the initial distance.

In some cases (such as when position is given as a distance from some reference point) it makes more sense to calculate distance and displacement based on initial and final positions:

where ∆d is the change in distance/displacement and Pf is the final distance and Pi is the initial distance.


Besides an object changing position, any study of motion requires some way to describe how long something takes. That is to say, we need to know how much time passes. The passing of time is commonly measured in hours, minutes, seconds, and fractions of seconds.
To find out how much time passes, we can subtract the clock or stopwatch reading at the beginning of the event from the clock or stopwatch reading at the end. With that in mind,

initial time is the clock or stopwatch reading at the beginning of an event. For a stopwatch, it could often be zero.…answers questions like "When did it begin?"

final time is the clock or stopwatch reading at the end of an event.…answers questions like "When did it end?"

For example, a track coach starts a stopwatch when the gun fires and stops it when the runner crosses the finish line. The initial time was zero and the final on the stopwatch was 10.5 seconds. Thus, the time that the runner ran was 10.5 seconds.
This allows for the understanding of a key concept related to motion: elapsed time.

elapsed time: the difference between the final time and the initial time.

In science time will usually be in hours, minutes, seconds, and fractions of a second.…answers questions like "How long did it take?"

To find the elapsed time, subtract the initial time from the final time. This is not always easy due to the need to borrow across the colon, and is discussed in more detail elsewhere. However, the general case is described by:

where t is the elapsed time, tf is the final time and ti is the initial time.

Elapsed time has a number of hours, minutes or seconds.

Measuring the Rate of Change in Position

Finally, understanding the above concepts allows getting to the definitions of a few more important motion concepts:


speed: the instantaneous measure of the rate at which position is changing without regard to displacement or direction.
velocity: the instantaneous magnitude and direction of an object that is changing position
average speed: the value represented by the distance an object moves in relationship to the elapsed time.
average velocity: the value represented by the displacement of an object in relationship to the elapsed time.


…answers questions like "How fast was it going?" and "What was it's average velocity?"

Look at the following image: 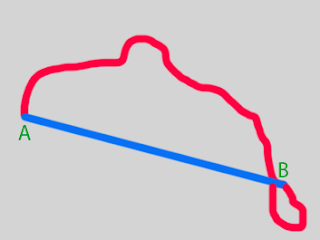 The red line represents the actual path that an object took in traveling from A to B. If the red line is 50 feet long, then the distance traveled is 50 feet.

The following discussion is from the context of a study of motion.

Posted by Bill Snodgrass at 5:26 AM