In science and engineering, math is a vital part of communicating the ideas related to any observation or situation. Sloppy or incomplete expressions of math only tell part of the story.

To properly tell the math story, it is necessary to 1.) begin with the formula. The formula establishes the relationship between all of the things that are part of the situation. The next thing is to 2.) plug in the values of the various variables. This tells the specific story. Lastly, 3.) simplify and reduce the math (solve the problem).

So, the steps in summary are:

It is important to fully accept that the math is a story. Math is a way to communicate the relationship between different quantities and properties. Math is the whole movie.

Just jotting down some numbers and coming up with an answer is like the movie trailer. It doesn't tell the whole story.

Math is often the most efficient way to explain the relationship between things and to show, when they interact, what happens. Suppose that a situation was described as follows:

A 10 newton force acts on a  5 kg box unopposed. What is the rate of acceleration.

Without math, using only words (and in the style of epic fantasy) here's what we would have:

Long, long ago, when the foundations of the universe were being created, the Creator deemed that there would be a universal relationship between the force acting upon an object, its mass, and the rate at which the force would accelerate it. So it came to pass that the rate of acceleration would be proportional to the force acting upon the object and inversely proportional to the mass of the object.

Some time later it occurred that there was a 5 kg box. Upon this box a force was applied and the magnitude of that force was 10 newtons. The relationship of force and mass resulted in the box changing velocity, accelerating from rest at a rate of 2 meters/second every second.


Now, with math, the same story:

The story is the same, but the telling is different. Math tells the story of science and engineering.

1. Write the formula.
2. Plug in the values.
3. Solve (making sure to use complete math expressions that include the equal sign).

Posted by Bill Snodgrass at 7:54 AM 3 comments:

The gist of this concept is fairly simple to understand. But, there are a lot of details between the concept and answering the questions.

The question will take the form of something like…

Simple enough on face value. But, did you catch the part about there being a lot of steps?

Step One: Start with a balanced equation.

The balanced chemical equation is like a recipe. It tells the ratio of ingredients in the compound. The principle works for all types of reactions, but a simple synthesis reaction makes the simplest example, so we'll look at that.

And, the mention of recipe evokes the idea of food, so let's start there.

(Credit to my colleague, M. Peterson, for this example.)

Let's make some s'mores. You know…

So, let's look at the balanced recipe for those: 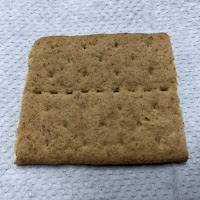 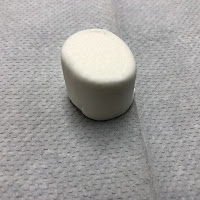 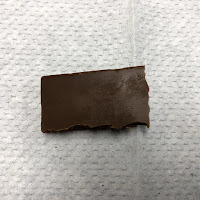 With these basic components two different varieties of S'more can be created! 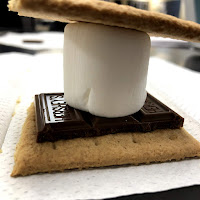 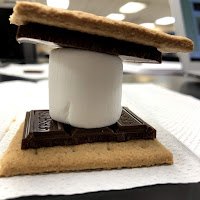 The coefficients to the balanced recipe tells how much of each thing is needed in a ratio. For the Single Chocolate S'more, the ratio is:

…or moles of items.

With chemistry, the concept of the mole prevails because of its connection to grams through the atomic mass of the elements. A mole of atoms weighs in grams the atomic mass. This is super, super convenient!

Understanding that the balanced chemical reaction gives us a set, fixed ratio of the atoms that must combine is the first, vital concept needed for the grams to grams stoichometry process.

So, let's make some water? And some hydrogen peroxide? Sure…

The balanced reactions above give us the ratio recipe for the molecules in the reaction. Granted, it is a simple synthesis reaction, but, as stated before, the principle that applies here and the method is the same regardless of the complexity of the reaction.

Step 1 is to find the balanced reactions. Done.

Step 2: Extract the ratio recipe from the coefficients.

What does that even mean?

This is actually pretty awesome in that chemistry is cool sort of way. (Just nod and follow along. Trust me, it's awesome!)

Like the s'mores, it is the ratio of "things" needed for a complete reaction without leftovers.

In s'mores, if you have only 2 crackers, you need only 1 marshmallow. Done. Period. Having more than one marshmallow means you'll have leftovers.

In many cases of introductory chemistry, you are looking for complete reactions without leftovers.

This is where the mole concept comes to the rescue! The relationship between moles, atomic mass, and grams saves us.

So, if you know the number of moles, multiply by the atomic mass OF THE MOLECULE to find out how many grams you have.

If you know how many grams you have, divide by the atomic mass OF THE MOLECULE to find out how many moles you have.

Now, that we have that figured out, we are ready to go to the next step.

Step 3: Figure out how many moles of the given thing you have.

This is why we chanted.

Say you have 37 grams of O2 and you are doing the water reaction. How many grams of H2 do you need (to react completely without left over).

Step 3a: Find the MOLECULAR MASS for the reaction.  Let's put those numbers below the molecules in the reaction.

Divide what you have by the mass of one molecule:


Step 4: Use what you have (Step 3b) and the recipe ratio (Step 2) and find out what you need for the other thing.

That sounds more confusing than it is.

The recipe calls for:

We have more than the 1 in the ratio, so we need to figure out what all of the numbers are. Easy.

Step 5: Convert the moles needed of the other thing to grams.

This is why we chanted.

How much did one mole of H2 weigh? It's up there somewhere!


Step 6: Bask in satisfaction that you are now done.

Let's do the peroxide without all of the discussion.

Starting with .75 grams of H2, how much O2 is needed to completely react without excess?

Step 3: How many moles do you have to begin with?

Step 4: Use the ratio to find moles of "other" thing.


Step 5: Convert moles needed of the "other" thing to grams.

The process is long, the concept is sorta complex, but it's really not all that hard. Just more tedious than anything.

Here are the steps:

Step 3: How many moles do you have to begin with?

Step 4: Use the ratio to find moles of "other" thing.

Step 5: Convert moles needed of the "other" thing to grams.

Posted by Bill Snodgrass at 1:38 PM No comments: