The following page is a list of formulas and very brief explanations.

where D is density, M is mass, and V is volume.

Temperature:
In science, we will use Celsius or Kelvin temperature scales to describe temperature.


To convert between Celsius and Kelvin:

To convert between Celsius and Fahrenheit:

Charles's Law
The volume of a gas is directly proportional to its temperature in kelvins if the pressure and number of molecules are constant.


Boyle's Law
The volume of a gas is inversely proportional to its pressure if the temperature and the number of molecules are constant.

When the number of molecules are included in calculations, the following formula can be used:


This law can be converted into the following form which will allow memorization of only 1 formula for gas law problems:

where vf is final velocity, vi is initial velocity, a is acceleration, and t is elapsed time.


An object is moving at a rate of 3 m/s and accelerates at a rate of 2 (m/s)/s for 5 seconds. What is its final velocity?

where v(ave) is average velocity, vf is final velocity, and vi is initial velocity. Also:

where df is the final, total displacement…

di is the initial displacement. (How far from whatever point of reference is the object when the thing starts accelerating?)…

vi is the initial velocity of the object at the beginning of the acceleration.

t is the elapsed time from the beginning of the acceleration until the end of the period being observed.

(vit accounts for the motion of the object based on its starting velocity. It keeps covering distance at the initial rate, and additionally, it accelerates and covers more distance.)

a is the acceleration and t is elapsed time.


An object begins 10 meters from a mark on a track with an initial velocity of 3 m/s. If it accelerates at a rate of 5 (m/s)/s for 4 seconds, how far from the mark does it end up?

Where F is force, a is acceleration, and m is mass, then:

Force of Friction—friction always opposes forces that are moving (or trying to move) an object.

where  Ff  is the force of friction,  Fn  is the normal force, and  μ is the coefficient of friction (a number that is looked up).

The normal force is the portion of weight that is perpendicular to the surface. For a flat surface (the angle between the surface and the horizon is zero, θ = 0):

Work is found by

where W is work, F is force applied (not net force!), and d is displacement/distance.

Kinetic energy (KE) is found with this equation:

where KE is kinetic energy, m is mass and v is velocity.


The potential gravitational energy can be found with this equation:

where PE is potential gravitational energy, m is mass, g is acceleration due to gravity, and h is height.


The amount of elastic potential energy is determined by how hard it is to compress or stretch something and how far it is stretched or compressed.

The equation to find this is:

where PE is potential elastic energy, k is a constant specific to a particular stretchy thing (spring, rubber band, etc.) and d is the distance that it is stretched or compressed (sometimes x is used instead of d, as in the illustration)

Now to find heat, we can use the formula:

Where Q is heat or thermal energy, m is mass, c is a number called specific heat that you either look up or calculate, and ΔT is the change in temperature.

Given the following information, find the work done on a 6.5 kg object after 4 seconds: 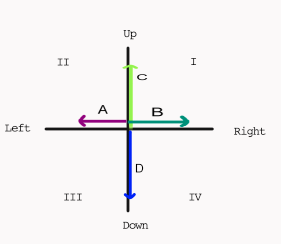 STEP 2: Find Acceleration where the force is the net force on the object:

STEP 3: Find the distance through which the force acted due to the net force.

STEP 4: Find the work done by the net force through the calculated distance.


To find the final velocity in the above:


To find final kinetic energy, first find the final velocity (above), and then:

Posted by Bill Snodgrass at 8:47 AM