Introducing Evolution of Populations and Biodiversity

Where are we going with this? The information on this page should increase understanding related to this standard:  Identify chronological patterns of change and communicate that biological evolution is supported by multiple lines of empirical evidence that identify similarities inherited from a common ancestor (homologies).

Article includes ideas, images, and content from Troy Smigielski (2022-01)
Introducing Evolution of Populations and Biodiversity
(This could be different!)
If you look around, even within an urban environment, you will see a huge number of different plants, and animals. Insects, alone account for bazillions of different species… But… well… you probably know that already.
This article will look at theories that provide some insight into how so much diversity might have come to be. It will look at patterns of change over time and attempt to put that into a biological framework.
Leading into the discussion, it would be helpful to introduce a few concepts.
Species
First is the species. A species, in biology, is a classification comprising related organisms that share common characteristics and are capable of interbreeding (Source 2020-03). Genetically, they share DNA configuration and can reproduce.
It is notable that some interspecies breeding is possible (hybridization), but usually results in offspring that are not capable of breeding. However, there are exceptions (e.g. ligers).
Population
Additionally, it is helpful to understand the idea of a biological population. In simple terms, population refers to a particular group within a species that can be easily identified apart from other members of the same species. Sparrows that live in Minnesota might (because of climate) be considered a different population as compared to sparrows that live in Florida.
Specimen
Within any population are the individual members. It is not uncommon to talk about a particular specimen within a population. Specimen refers to any single member of a population.
Sample
While we are at it, let's just get this out of the way, too!
A sample is a selection of some number of specimen from a population. A naturalist might take a sample of 10 specimen from that population of sparrows that live in Florida and compare them to a sample of 10 specimen from that population of sparrows that live in Minnesota!
Two Types of Evolution: Macro and Micro 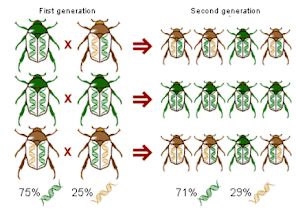 Evolution (of species) can be viewed through two distinct lenses. The first is microevolution.
Microevolution is characterized by small-scale changes in a population that lead to favorable traits being reproduced. This is similar to the effect of favorable adaptations. Microevolution can take place over the course of a few years in organisms that reproduce quickly.
There are many examples of microevolution such as:
Microevolution refers to evolutionary changes within a species (or a single population of a species) over a relatively short period of time. The changes often only affect a single trait in the population, or a small group of genes (Source, 2022-03).
In many cases, the species will adapt to changes around it. Natural selection plays a role in this; the traits and behaviors that lead to higher levels of fitness are passed on. Traits and behaviors that decrease fitness eventually are far less prevalent if they exist in the population at all.
It is important to understand that microevolution refers to changes of traits and behaviors within a species that remains the same species. 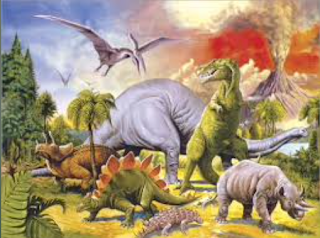 Macroevolution, on the other hand is the large-scale evolutionary changes that happen over a long period of time, and often results in either creating or destroying a species.
The end result of macroevolution is that a particular species of something either ceases to exist (extinction) or shifts genetically into one or more new, different species. If macroevolution occurs, it results in there being different species.
Both types of evolution occur amongst populations of organisms.
Patterns in Macroevolution
There are 6 patterns of macroevolution.
Extinction
Extinction is the state of a species being completely gone.
Many species in the 21st Century are on the verge of extinction due to factors such as loss of habitat or human harvesting. These species are considered to be endangered.

Endangered species are those that are at risk of becoming extinct.
History has witnessed the extinction of numerous species including the wooly mammoth and the dodo bird. 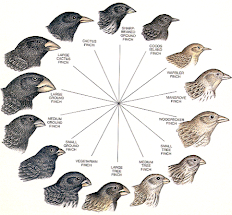 Adaptive radiation
Adaptive radiation is the process of a single species evolving into several new species that live in different ways. This is what Darwin claimed happened among finches on the Galapagos Islands.
This is typically a result of minor adaptations.
Convergent evolution
Convergent evolution is the process by which unrelated organisms come to resemble one another.
This commonly happens through adaptations that appear in response to environmental conditions (analogous structures). 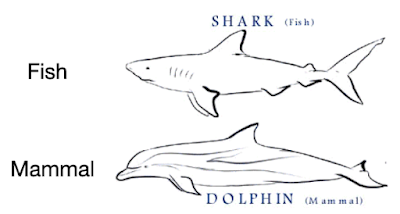 Converge means to come together. In dolphin and sharks, both adapted to have slender bodies so they could glide through the water easily. 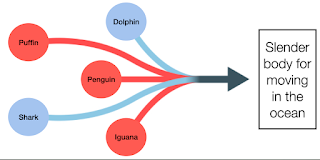 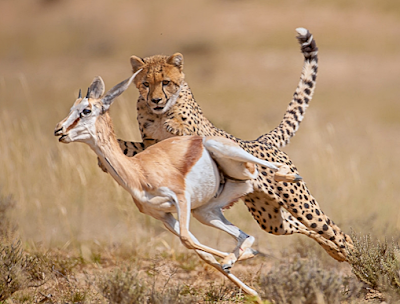 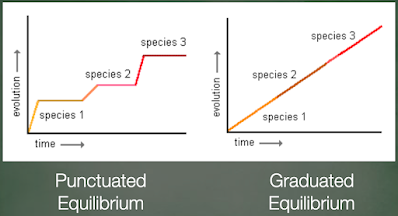 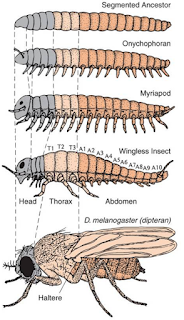 Changes in developmental genes
Changes in developmental genes happen when genes that control the development of an organism are altered. All of the genes in one population are part of their gene pool. If the gene pool changes, then some genes must have changed. Genes are made up of specific sequences of DNA. In order for genes to change, the DNA must change first.
Mutations are changes in the DNA sequence and are a common source of genetic variation.
Posted by Bill Snodgrass at 4:22 AM