Where are we going with this? The point of this deck is to provide concepts,background information and examples related to the kinetic theory of matter. Using this model will help predict behaviors of substances within a variety of environments and help quantify
Temperature Scales
Temperature is measured using a thermometer. "Thermo" is a greek word for… just say heat. "Meter" is from a Greek word meaning measure. Hence… Never mind. 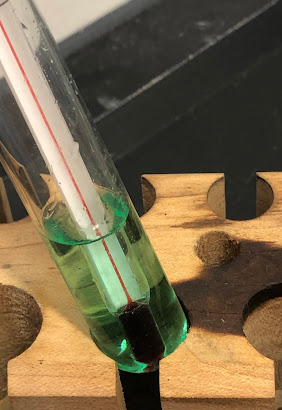 Instead, we say that the temperature is some degree of hot. Higher degrees mean higher whatever, so in temperatures, higher degrees mean higher kinetic energy.
The degree of hotness (kinetic energy) is described using three common scales: Fahrenheit, Celsius, and Kelvin.
Fahrenheit isn't used much in science, but arguably, it could be.
Celsius was devised such that water freezes at 0° C and boils at 100° C.
Kelvin was devised based on… So… hang on for this…

What happens if the molecules slow down a lot? That means the temperature goes down a lot.

What happens if the molecules stop! That means that (look above for the equation) the energy is zero.

You can use math or Google to convert from any of the scales.

Posted by Bill Snodgrass at 9:10 AM