Where are we going with this? The information on this page should increase understanding related to this standard:  Understand how photosynthesis turns light energy into chemical energy. 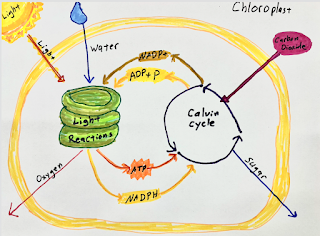 The Calvin Cycle uses the ATP and the NADPH made in the light dependent reactions for energy to fuel itself.
In the process, the ATP (plus water, H2O) is broken into ADP (Adenosine diphosphate, C10H15N5O10P2) and a phosphate ion (PO4-3)
Whereas the following represents the reaction going on in the diagram…

…a close look reveals that there are more hydrogen atoms on the reactant side. Remember that the ATP-ADP cycle is only PART of what is going on!
So, here's the big idea…
ATP + Water becomes ADP + phosphate + ENERGY! ENERGY! ENERGY! (and also some H atoms)
The Calvin Cycle also uses the CO2 that we exhale to make glucose.
Recall that the CO2 comes into the plant from the atmosphere. It enters the leaves through openings called stomata. Stomata are protected by guard cells that open during the day and close at night.
The Calvin Cycle Steps
So… there's a reason its called a cycle! It goes around and around as it produces the sugar. The process can be understood only by seeing it in motion. There's not exactly a starting place; all of the cycle parts are present when… 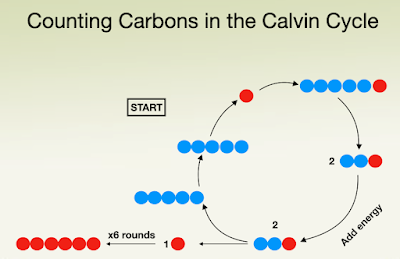 Okay, let's start with a CO2 coming in… what happens to it?
Step 1: One CO2 molecule enters the leaf. It combines with a 5-Carbon molecule called RuBP. 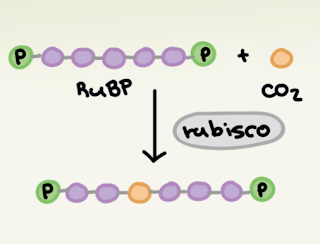 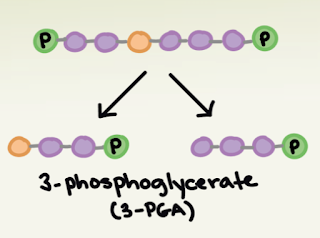 Step 3: ATP and NADPH (high energy) from light dependent reactions are used to convert the PGA into G3P (aka PGAL). When ATP is used for energy, it becomes ADP. 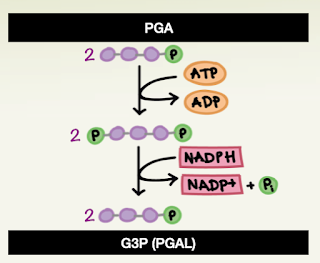 When NADPH is used for energy, it becomes NADP+. These compounds go back (eventually) to the light reaction to be reenergized.
Step 4: One carbon from the G3P molecules goes on to start making a glucose. The other 5 carbons of the G3P are regenerated into RuBP to start the cycle over again. 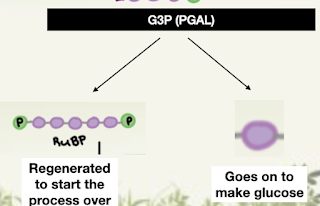 Step 5: The cycle repeats 6 times to form one molecule of glucose. 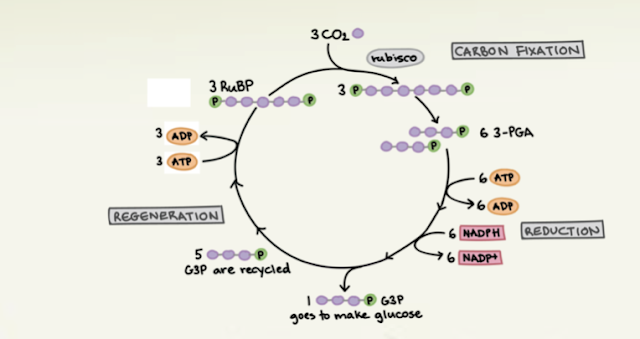 The above diagram shows the reactants and products of the cycle happening 3 times (all in the same diagram). It has to happen 6 times to produce one glucose molecule. Each cycle adds one carbon to what will become the glucose chain (at the bottom).
Some diagrams you might see will show this cycle differently. 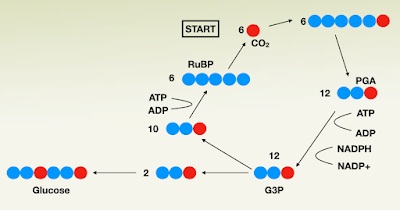 The above diagram shows the cycle after it has happened 6 times.
Light Independent Reactions: Bottom Line 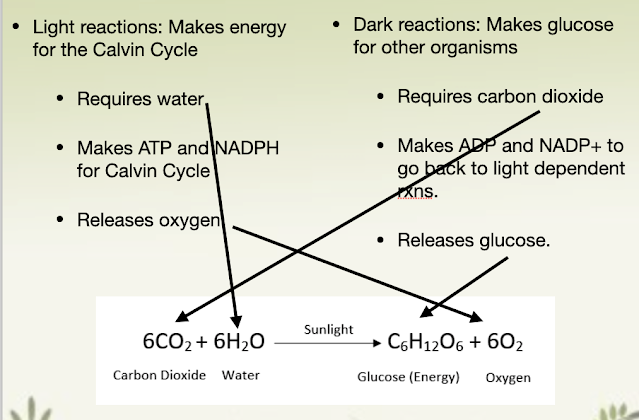 Posted by Bill Snodgrass at 4:49 AM