Where are we going with this? The information on this page should increase understanding related to this standard:  Model and understand aerobic respiration demonstrating the flow of matter and energy out of a cell and explain energy transfer systems. Also, compare aerobic respiration to alternative processes of glucose metabolism.

Article includes ideas, images, and content from Troy Smigielski (2021-10)
Krebs Cycle (Citric Acid Cycle)
(This sounds like something off of Sponge Bob!)
So, this process has three names, actually!
Krebs Cycle = Citric Acid Cycle = tricarboxylic acid cycle
(Must be important!)
Also, I head this guy on YouTube call it the Hans cycle, because that was Krebs' first name… Hans Krebs. So, yeah… That…
The Krebs cycle is a part of cellular respiration by which adenosine triphosphate (ATP) is produced. It's… complicated!

It "is a central driver of cellular respiration. It takes acetyl CoA—produced by the oxidation of pyruvate and originally derived from glucose—as its starting material and, in a series of redox reactions, harvests much of its bond energy in the form of NADH, FADH2, and ATP molecules. The reduced electron carriers—NADH and FADH2—generated in the TCA cycle will pass their electrons into the electron transport chain and, through oxidative phosphorylation, will generate most of the ATP produced in cellular respiration (Source 2021-11). 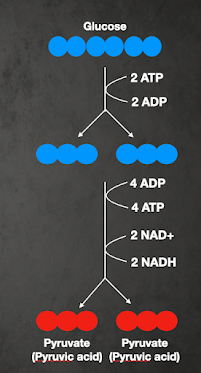 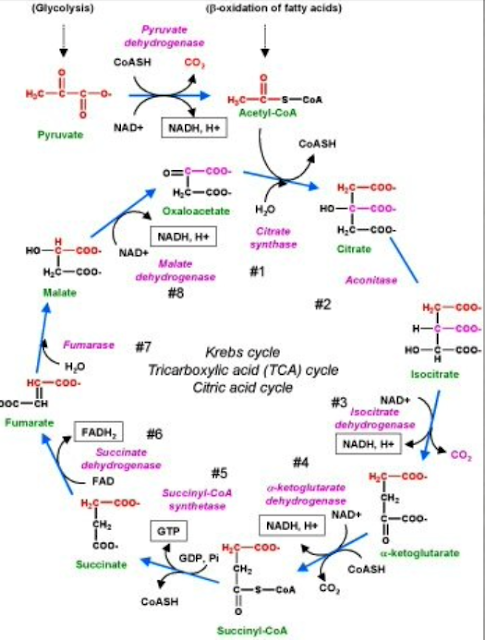 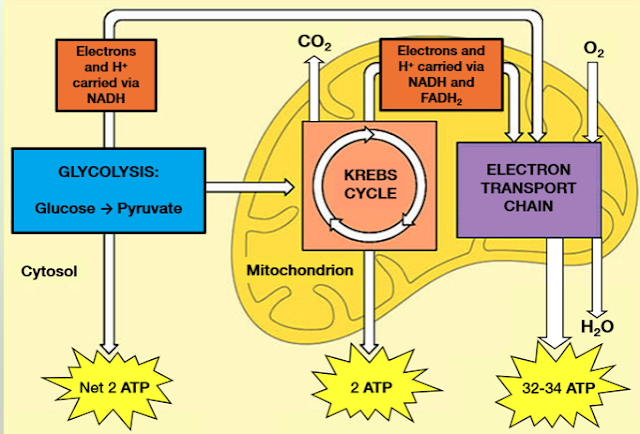 The Krebs cycle is the source for most of the NADH and FADH2 that will be used in the electron transport chain.
Next, entering the Krebs cycle, Acetyl CoA (2-C) combines with oxaloacetate (4-C) to form citric acid (6-C).
After rearrangement, citric acid releases two of its Carbons as CO2 into the atmosphere.
As each CO2 leaves, one NADH is also produced. So, if 2 CO2 are released, then 2 NADH are also produced.
These CO2  molecules are exhaled and released into the atmosphere. They are byproducts not needed by the cell.
The remaining four carbons go through reactions to regenerate oxaloacetate so that the cycle can repeat. In the regeneration process, one ATP, one NADH, and one FADH2 are made.
One round of the Krebs cycle produces:
These numbers are for one round. One round started with only one pyruvate. Remember, one glucose at the beginning makes 2 pyruvate. Therefore, we need to multiply these numbers by 2 to see the total number of each product that are made by one glucose molecule.
One molecule of glucose produces:
The energy in these electrons that are carried by NADH and FADH2 will go the the ETC (Step 3 of the cellular respiration process) to help produce many more molecules of ATP.
Posted by Bill Snodgrass at 9:51 AM