Where are we going with this? The information on this page should increase understanding related to this standard:  Explore the process of mitosis understanding why mitosis happens, the main goal of mitosis, and the key terms involved in mitosis.

Article includes ideas, images, and content from Troy Smigielski (2021-11)
Overview of Mitosis
(Hmm… )
"Mitosis is a process where a single cell divides into two identical daughter cells (cell division). During mitosis one cell? divides once to form two identical cells. The major purpose of mitosis is for growth and to replace worn out cells" (Souce, 2021-11)
So, cells split… hmm…
Why does mitosis happen? Why is it necessary for cells to divide?
Three reasons cells divide:
1. Healing: to replace old or damaged cells.
2. Growth: to help an organism’s growth in an orderly way.
3. Transport: to help efficiency of cellular transport.
Your cells will duplicate to make your body more efficient.
As a cell grows in size, its volume increases quicker than its surface area. Since cells rely on the surface area (the membrane) to get nutrients in to all of its parts, too much volume puts parts of the cell too far from the membrane. 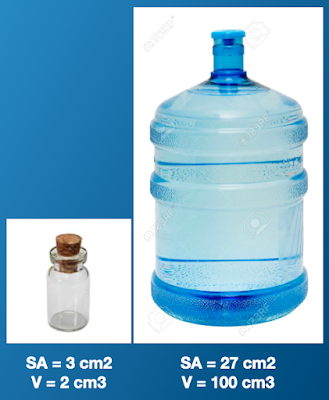 For this reason, cells divide. If cells didn’t divide, the cell would have a massive volume. This would require your cell a great deal of energy to transport materials.

How do cells divide? 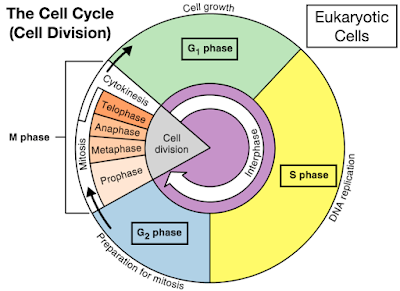 In eukaryotic cells, the 2 main stages of cell division are interphase and mitosis.
Prokaryotic cells undergo a process called binary fission.
The main goal of the cell cycle is to create 2 identical cells from one cell for the purpose of healing, growth, or to maximize the efficiency of cell transport.
To do this, your body must go through the cell cycle.

What are the 2 main phases of the cell cycle?

What would that look like, say, for a human cell?
Pictures! 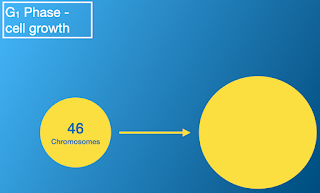 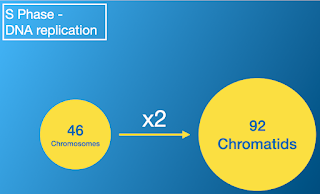 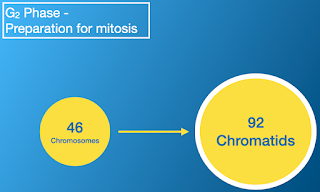 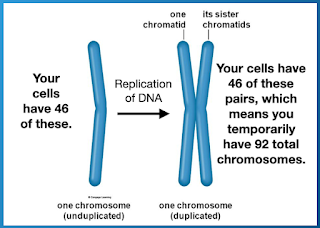 Sister chromatids are attached at a region called the centromere. 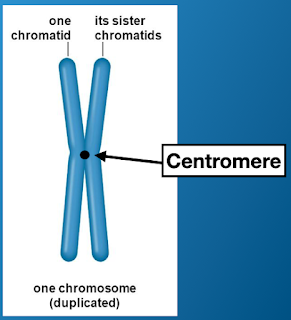 Once Interphase is complete, the cell moves on to mitosis. What is the goal of this entire process?

Simply put, mitosis is the process when a cell divides replicated DNA (from Interphase) into 2 cells that are both identical to the original cell. 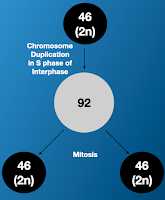 Pass Me Another Taco

At the end of telophase, the cell divides into two separate cells in a process called cytokinesis. 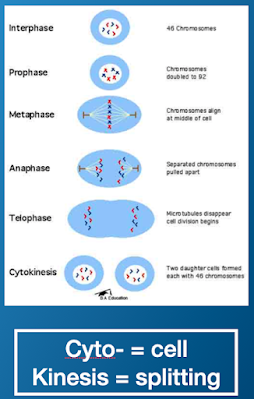 In order to do this, your cell uses centrioles, which are organelles that function to separate sister chromatids. They do this by using spindle fibers. 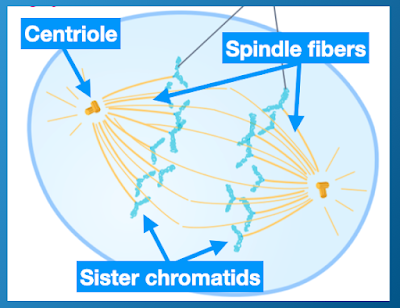 Different types of cells go through mitosis at different rates based on how often they need to be replaced.
Posted by Bill Snodgrass at 5:35 AM