Where are we going with this? The information on this page should increase understanding related to this standard:  Explore the process of mitosis understanding why mitosis happens, the main goal of mitosis, and the key terms involved in mitosis.

"Mitosis is a process where a single cell divides into two identical daughter cells (cell division). During mitosis one cell? divides once to form two identical cells. The major purpose of mitosis is for growth and to replace worn out cells" (Souce, 2021-11)
So, cells split… hmm…
Why does mitosis happen? Why is it necessary for cells to divide?
Three reasons cells divide:
1. Healing: to replace old or damaged cells.
2. Growth: to help an organism’s growth in an orderly way.
3. Transport: to help efficiency of cellular transport.
Your cells will duplicate to make your body more efficient.
Simply put, mitosis is the process when a cell divides replicated DNA (from Interphase) into 2 cells that are both identical to the original cell. 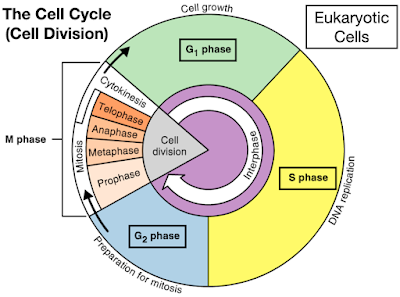 Mitosis
Make
two cells from
one cell
having identical (same) types and numbers of chromosomes
How does this occur?
In order to do this, your cell uses centrioles, which are organelles that function to separate sister chromatids. They do this by using spindle fibers. 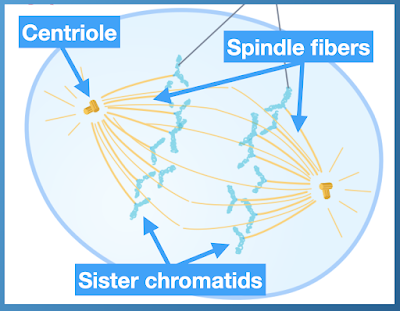 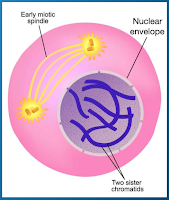 In prophase, chromatin is organized into chromosomes. Chromatin is the stringy material that makes up a chromosome.
During this phase, centrioles begin to move to opposite sides of the cell. Lastly, the nuclear envelope begins to disappear. 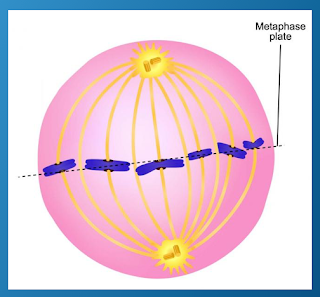 At this point, the nuclear envelope is gone allowing chromatids to move freely.
The free chromatids line up in the middle of the cell along the metaphase plate. 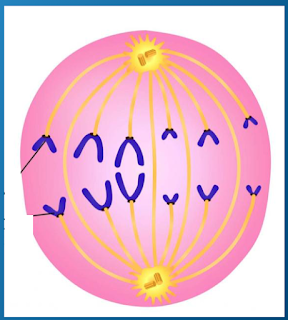 Sister chromatids are pulled apart to opposite sides of the cell by centrioles using spindle fibers. 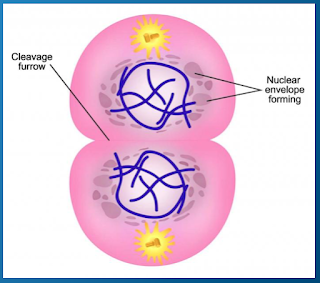 The last part of the process is called cytokinesis. 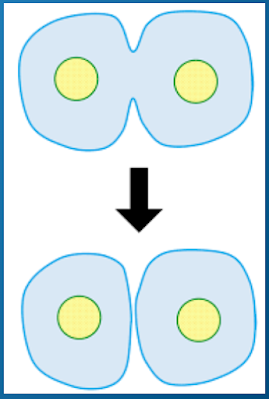 In other words, the cytoplasm divides. 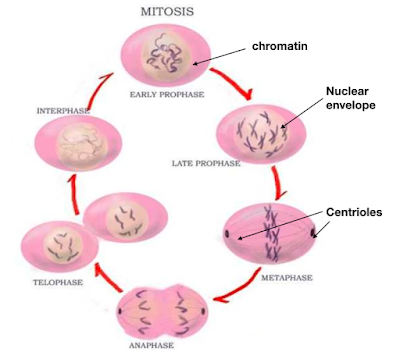 At the end of mitosis, we have two brand new diploid cells. Wait! What is this thing, diploid? 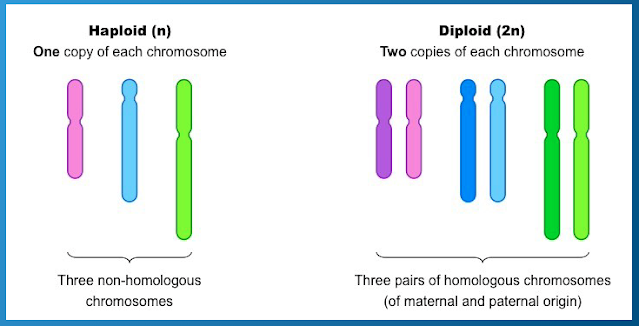 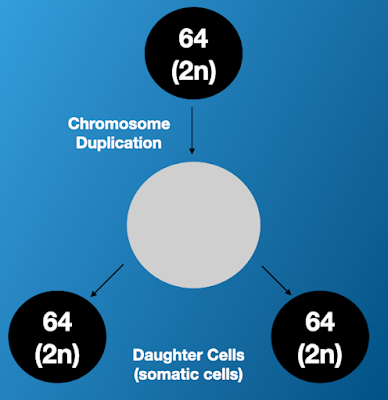 While most of the cells in your body divide, some do not.
Blood Cells
Blood cells do not duplicate. Why? 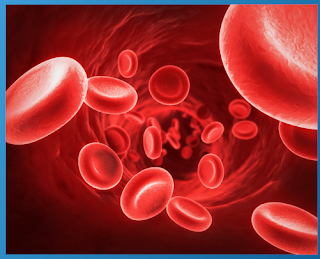 In order to carry more oxygen, blood cells end up without a nucleus. This means they have no DNA. So, they cannot duplicate chromosomes in Interphase, which means they can’t undergo mitosis.
Brian and Never Cells 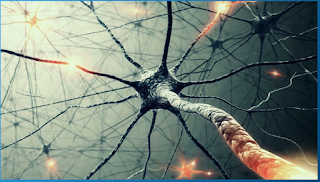 Because brain and nerve cells cannot duplicate, spinal and brain injuries typically cannot repair themselves.
In the process of cell division, recall that a certain organelle functions to pull sister chromatids apart from each other by using spindle fibers.
Neurons do not have centrioles, so they are unable to divide. 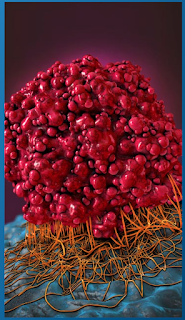 Your body uses proteins called cyclins to regulate the cell cycle.
Cyclins function as checkpoints that decide if the cell cycle should continue or not.
Cyclin is a family of proteins that controls the progression of a cell through the cell cycle by activating cyclin-dependent kinase (CDK) enzymes or group of enzymes required for synthesis of cell cycle.
For instance, if the DNA is damaged, the process will be stopped; the damaged DNA will not be replicated.

If your body cannot properly control cell growth, what may happen? 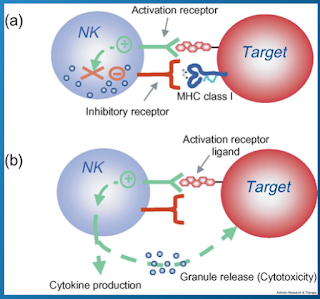 Your body has innate immunity that has the ability to naturally fight these cells off.
These cells are called natural killer cells.
Your NK cell count is influenced by exercise and diet.
Posted by Bill Snodgrass at 9:17 AM