Where are we going with this? The information on this page should increase understanding related to this standard:  Evaluate comparative models of various cell type…Evaluate eukaryotic and prokaryotic cells.

Article includes ideas, images, and content from Troy Smigielski (2021-09)
Cell Organelles
(Do they play music??)
Okay… starting with cell theory, we are expected to agree that…
Wait, we did that already! Okay, what next?
Let's look at those organelles we find inside the cells!
How about we start with a definition?
"An organelle (think of it as a cell’s internal organ) is a membrane bound structure found within a cell.
Just like cells have membranes to hold everything in, these mini-organs are also bound in a double layer of phospholipids to insulate their little compartments within the larger cells. You can think of organelles as smaller rooms within the factory, with specialized conditions to help these rooms carry out their specific task (like a break room stocked with goodies or a research room with cool gadgets and a special air filter). These organelles are found in the cytoplasm, a viscous liquid found within the cell membrane that houses the organelles and is the location of most of the action happening in a cell."
(Source, 2021-09)
Nucleus 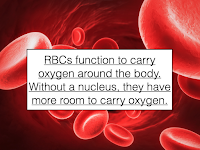 The nucleus houses the cell’s DNA in chromosomes (chromatin) and controls cell activities. The nucleus protects the DNA. If the DNA was not kept safe inside the nucleus, it would be vulnerable to damage from other things.

Not all cells have a nucleus. For instance, red blood cells do not. The function of red blood cells is to carry oxygen throughout the organism. Without a nucleus, they can carry ore oxygen.

So, does this make red blood cells prokaryotic? Not actually. They start out as eukaryotic cells, but as they develop, the get rid of their nucleus.

But back to that genetic information in the nucleus… In the nucleus, the genetic information (DNA double helix) is packaged by special proteins (histones) to form a complex called chromatin. The chromatin undergoes further condensation to form the chromosome. (Source, 2021-09)
So, to sum it up a little, the nucleus houses the genetic information in chromosomes.
The nuclear components are suspended within the nucleus in a gel-like substance called nucleoplasm.
Nucleolus
The nucleolus is located inside the nucleus of a cell. The nucleolus is not bound by a membrane, so it actually isn't an organelle, but it is notable enough to warrant discussion.
The nucleolus is a space that forms near the DNA and there, it makes ribosomal subunits. Ribosomes are assembled in the nucleolus and exit the nucleus through openings called nuclear pores.
Ribosomes
Ribosome parts are built in the nucleolus. Both prokaryotic cells and eukaryotic cells have ribosomes.
The function of ribosomes is to build proteins.
Rough Endoplasmic Reticulum
Rough endoplasmic reticulum helps fold and modify proteins. It is studded with ribosomes.
This is the assembly line of the cell that has ribosomes as the workers.
Smooth Endoplasmic Reticulum
Smooth endoplasmic reticulum makes lipids, steroid hormones, and it helps in the detoxification of byproducts. It does not have ribosomes. 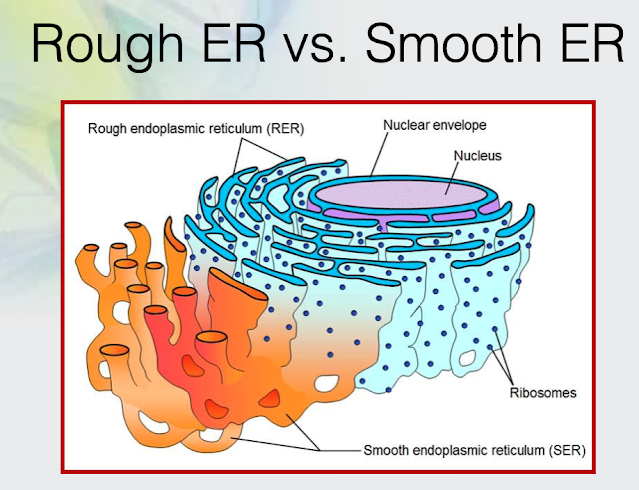 Golgi Apparatus (AKA Golgi Body)
Packages and ships proteins once they are made.
A Golgi body, also known as a Golgi apparatus, is a cell organelle that helps process and package proteins and lipid molecules, especially proteins destined to be exported from the cell.
Lysosome and Peroxisome
Have digestive enzymes that break down waste, food particles, and/or bacteria or viruses.
Mitochondrion (POWERHOUSE OF THE CELL)
The mitochondrion has the function in the cell to make ATP (adenosine 5'-triphosphate, cellular energy).  More on that can be found HERE.
The mitochondrion is the site of cellular respiration.
Vesicles
Molecules used for transport.
These are the "boxes" that proteins get packed into.
Plasma Membrane

Both prokaryotic cells and eukaryotic cells have a plasma membrane. It is also called a cell membrane or cytoplasmic membrane.
Controls what enters and exits the cell.
The plasma membrane is made up of a phospholipid bilayer.
Cytoplasm
Surrounding all of the organelles within the cell is a fluid-like material called cytoplasm.
Putting it all together…
Well, cells vary in composition based on their function within the organism, but, a good, general picture of a cell includes ten key organelles, plus the cytoplasm in which they all are arranged.
Working together, all of the organelles carry out the work needing to be performed by the cell. 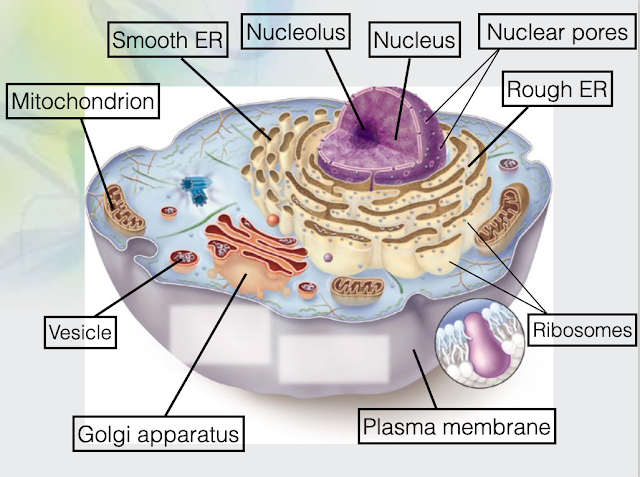 The Cell in Action
Thinking about how the cells carry out their work, it is convenient to think of some organelles as systems working closely together. One set of organelles forms what is called the endomembrane system.
The endomembrane system consists of the endoplasmic reticulum, the Golgi apparatus, and the vesicles.
These three organelles work together to make, package, and transport proteins.
Plant Cells
Plant cells have a few additional organelles. These organelles have important functions in plants, and are not found in animals.
Vacuole
"A vacuole is a membrane-bound cell organelle. In animal cells, vacuoles are generally small and help sequester waste products. In plant cells, vacuoles help maintain water balance. Sometimes a single vacuole can take up most of the interior space of the plant cell." (Source, 2021-09)
Plant cells have an organelle for storage. The large central, vacuole functions to store materials like water, sugar, or waste.

Both animal and plant cells need ATP.
However, only plants have chloroplasts. Animals do not carry out photosynthesis; the chloroplasts function as the location whereby photosynthesis takes place in plants.
How about a chart? That would be cool!
Cell Organelles and their Functions

Posted by Bill Snodgrass at 6:08 AM