Where are we going with this? The information on this page relates to the skills needed to investigate and evaluate the graphical and mathematical relationship (using either manual graphing or computers) of one-dimensional kinematic parameters (distance, displacement, speed, velocity, acceleration) with respect to an object's position, direction of motion, and time.
Understanding Vectors and Vector Math
(Oh brother! What now?)
In THIS, the concepts of vectors were looked at "from a distance" and by example. Here, we'll try to get a little closer and start thinking more about the math… Examples seem like a good idea, though, so… Yeah…
Let's begin with this little reprise:

The study of objects in motion and forces acting upon them relies heavily on using vectors. Thus, having an understanding of vectors is very important. So… we should talk about this…
A vector is a concept connected to quantities that specifies a magnitude and a direction.  Answering many physics questions about the world around us best done by using vectors. 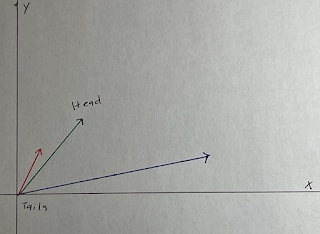 It is very, very common to draw diagrams showing how vector quantities are acting on an object. Usually, there will be some sort of reference thing… the horizon… the plane of a ramp… often, the x-y axis thingy. (Thingy? Really? That's the best you can do?)
Vectors, in the diagrams, are represented by arrows.

Vector arrows have a tail and a head. The pointy end is the head.

Strictly depicted, the length of the arrows should be drawn exactly in proportion to their lengths. So, a vector with a magnitude of 4 would be twice as long as one with a magnitude of 2 and half as long as one with a magnitude of 8. NOTE: any illustrations on this page are NOT strictly depicted!
Likewise, the angles should correctly represent the angle at which the vector operates on the object being observed.
Working With Vectors: The Big Picture
When more than one vectors of any give quantity (e.g. force, velocity, acceleration) operate on an object within some frame of reference, their effect combines. The the vector that results in the combination of each of the component vectors.

Component vector: Any individual vector having magnitude and direction within a given frame of reference.
Component vectors can be combined into a resulting vector (or the resultant vector).

What if you start with the resultant? Yeah, that can happen!

A resultant vector can be broken down into its component vectors. 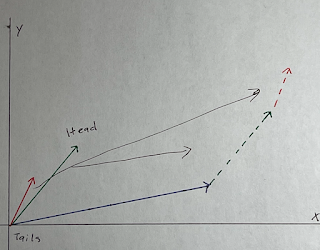 Working with strictly depicted vector diagrams, all of the component vectors working on a single object can be rearranged such that they create a depiction of the resultant vector.
To do this, any of the vectors can, IF THEIR ANGLE WITHIN THE FRAME OF REFERENCE DOES NOT CHANGE, be moved so that its tail connects to head of the second vector. All of the vectors in the system can be moved in this same manner. This only works if the moved vector remains parallel to its original direction. (That is the same as saying that the angle does not change.)
A line from the tail of the first vector to the head of the last vector represents the resultant vector.
Moving a vector so that its origin is in a different place, but without changing its direction or magnitude is called vector translation.
Finding a resultant vector by translating component vectors is a process that is sometimes called "The Triangle Method."
The order in which the vectors are rearranged does not matter. (This will be true when we look at the math process, too.) This is true combining vectors is essentially adding their effects, and since there's some fancy name (the commutative property) for math that says it doesn't matter what order we do addition.
Also, since… all that about adding their effects… if vectors point in opposite directions, their effects reduce each other, even to the point of cancelling totally. This is easily observed when two vectors are operating on a single line.
Think tug-of-war; two force vectors are pulling in opposite directions. When evenly matched, both forces have the same magnitude, but in opposite directions. Hence, the effect of the force does not result in the flag moving.
So (jumping ahead to math approaches), when operating in opposite directions, one vector can be thought of as positive and the other negative.
Working With Vectors: Math Processes
Mathematically, working with vectors begins with nearly trivial simplicity, then becomes more and more complex. The simplest situations involve vectors on a single line / axis. Next up are vectors at right angles. Finally, when the vector is some arbitrary angle to the axes, the math becomes most complicated.
Vectors On One Line
When vectors lay on a single axis, all that is necessary is to assign positivity and negativity to the directions. Left is negative, right is positive. Right is negative, left is positive. Up is positive, down is negative. Something like that…
The resultant vector is the sum of the signed component vectors.
A box moves from a point of origin 10 meters left, then 4 meters right, then 2 meters left, then 3 meters right. Where is the box in relationship to the point of origin.

Vectors At Right Angles To Each Other

In the case where more than one vector acts on an object and they are at right angles, the process is fairly easy.
The first thing to do is create a diagram aligning the vectors with the vertical and horizontal axes (x and y). If the vectors are perpendicular, one of them will align with each axis.
Then, translate one of the vectors so that its origin moves to the head of the other one.
The resultant vector will be the hypotenuse of the triangle formed.
If you have several vectors that act on the same line, you can combine them into a single resultant vector. Once you have two perpendicular vectors, you can find the resultant (as above).
vector is some arbitrary angle to the axes
MORE TO COME!
Posted by Bill Snodgrass at 4:29 AM