Where are we going with this? The information on this page should increase understanding related to this standard:  Evaluate comparative models of various cell types with a focus on organic molecules that make up cellular structures.
Article includes ideas, images, and content from Troy Smigielski (2021-08) 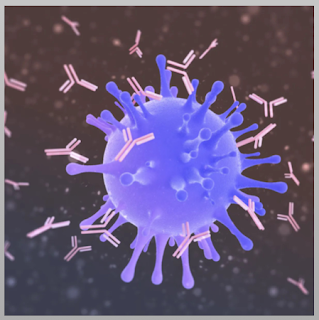 Proteins
(Hmmm… This rings a bell!)
In addition to carbohydrates and lipids, there are two more types of biomolecules. One of them is proteins…
Proteins function to control what cells do.
For instance, proteins can:
Another "for instance" is…
Cells within organisms often need to communicate and work together to carry out life’s processes. Proteins play a vital part in this. Proteins on cell surfaces act as receptors to certain compounds, allowing cells to alter as needed.
As a way of looking at it broadly, proteins regulate cell processes or transport materials into and out of cells.
Composition of Proteins
Proteins are made up of amino acids sequenced together in a chain.
(Grrrr… another chain! Why do I think this means more elements and bonds?)
Thus, the monomer of proteins are amino acids.
An amino acid is… complicated…

Amino acids consist of a basic amino group (―NH2), an acidic carboxyl group (―COOH), and an organic R group (or side chain) that is unique to each amino acid. The term amino acid is short for α-amino [alpha-amino] carboxylic acid. Each molecule contains a central carbon (C) atom, called the α-carbon, to which both an amino and a carboxyl group are attached. The remaining two bonds of the α-carbon atom are generally satisfied by a hydrogen (H) atom and the R group (Source, 2021-09-01).

How about trying that with less words!

The general form of an amino acid looks like this. 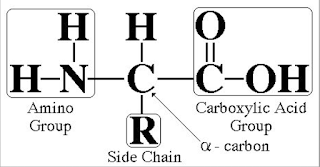 There are 20 common amino acids used by all living things. In addition to proteins, amino acids form peptides and polypeptides, but… let's hold off on that for now. 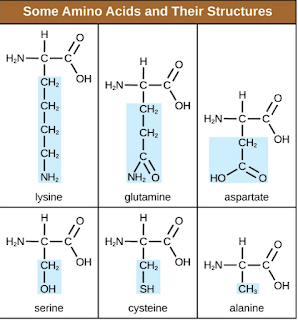 Let's recap… before we press on…

Proteins are made of amino acids.

Amino acids have four parts arranged around  a central carbon. Carbon has 4 places stuff can bond to it.

Part 2: One bond is usually H2N, an amino group.

Part 3: One bond is the carboxylic acid group (usually written as -COOH or CO2H).

Part 4: The fourth bond is the "organic side chain" called the "-R Group"

Hey… weren't we talking about proteins?

So, there are 20 different amino acids, and they combine to form proteins (and peptides and poly peptides, but we're overlooking that, here). The order in which the amino acids combine determines what protein is made. 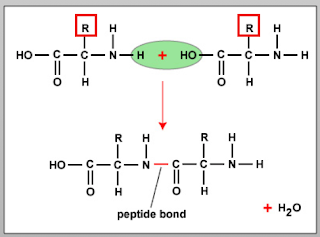 So… about those peptides…and polypeptides…

When amino acids are attached, they are held together by a peptide bond. Two amino acids isn't a protein, but… we're on the way! The newly formed molecule is called a polypeptide.

When many polypeptides are joined together, a protein is made.

Also, some water is formed…

So, connecting the amino acids (by means of the peptide bonding) creates (potentially) long chains.

Don’t miss this!! Proteins are made when amino acids are put together in a specific order.

… amino acids are the alphabet

There are many different kinds of proteins that do a very elaborate and diverse set of tasks in your body:

Proteins have many, many functions. For example, GFP is a protein that provides a fluorescent color to an organism. 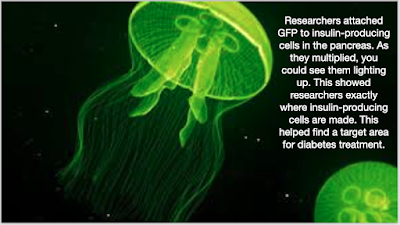 Another example: AFPs are proteins found in northern cod, and they prevent freezing.

Enzymes are mostly proteins that speed up chemical reactions.

Denaturation is the unraveling of a protein. When a protein denatures, it unravels and loses its shape.

This makes proteins biologically inactive. It can be caused by: 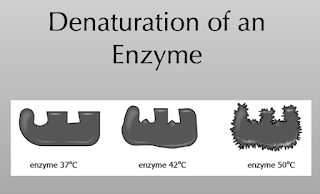 Examples of Proteins and Their Purposes

Keratin is a structural protein in hair.

Hemoglobin is a transport protein in blood.

Insulin is a hormonal protein that functions to regulate blood sugar.

Actin and myosin are movement proteins in your muscles.

Antibodies are defense proteins in your immune system.

Casein is a protein in milk that is beneficial for muscle repair.

Myoglobin binds oxygen in your muscles.

FOXP2 is required for speech, and is unique to humans.

Laminin is the protein that anchors our whole body together.

Posted by Bill Snodgrass at 4:12 AM