Where are we going with this? The information on this page should increase understanding related to this standard:  Evaluate comparative models of various cell type…Evaluate eukaryotic and prokaryotic cells.

Article includes ideas, images, and content from Troy Smigielski (2021-09)
Passive Cellular Transport and Tonicity
(This sounds important!)
All cells have a membrane. To be more specific, all cells have a phospholipid bilayer membrane that keeps stuff in and out of the cell. It is also called the plasma membrane.
The cell membrane is constantly moving like a wave. It is composed of phospholipids and other molecules such as cholesterol, proteins, and fatty acids.
Scientists often describe the cell membrane with the fluid-mosaic model, which describes these 2 characteristics.

In addition to the cell membrane, plant cells have cell walls that function to provide structure, support, and protection for the cell. They are made up mostly of cellulose, a polysaccharide carbohydrate.

Since cell membranes function to regulate what enters and exits the cell, there must be some method of getting material in and out. One of the methods is passive cellular transport.
Because cell membranes are made up of a phospholipids arranged in a bilayer, small, hydrophobic molecules can fit between gaps in the phospholipid heads. However, most large, charged, or hydrophilic molecules are unable to cross (pass through the membrane). Water is special in that it is polar and hydrophilic AND it can cross.

There are two types of integral proteins (see illustration below):
These integral proteins are extremely important; they are necessary because the cell needs all kinds of large, charged, and hydrophilic compounds to carry out its normal function,
There is a very important aspect to passive cellular transport. Look at the following image. 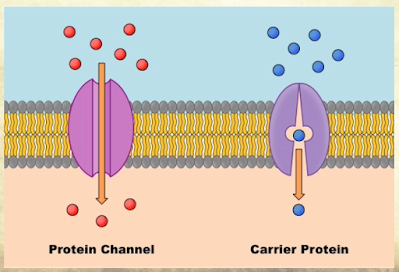 What do you notice about the direction the molecules are moving? They are all moving from where there are "more" to where there are "less."
Why?
The purpose of particle transport is to ensure the cell maintains homeostasis, or equilibrium.
Woo… dropping some vocab in without telling us?
Equilibrium is the point when the number of solutes is the same on both sides of the membrane. When something is at equilibrium, it can be said to be in homeostasis.
Not only are the numbers the same one both sides of the membrane, but also equilibrium is when the rate of materials going in equals the rate of materials going out.
Reprise; Equilibrium is…
There are a couple of ways for cells to reach equilibrium, and they are all a form of passive transport. However, in order to discuss them properly, we need to make sure we understand a concept called concentration.
Concentration is simply the amount of a substance in a solution.
Passive transport is the movement of molecules or ions across the cell membrane from an area of high concentration to an area of low concentration.
It does not require energy.
Molecules naturally flow from high concentration to low concentration. The difference in concentrations between the inside and outside of the cell is called a concentration gradient.
Molecules naturally flow along the concentration gradient from [HIGH] to [LOW].

Almost everyone can easily visualize another type of equilibrium. Not cellular, but thermal. Heat energy, like molecules in passive transport, flows from matter with high levels of energy to matter with low levels. If the temperature of our soda is too high, we can transfer some of that heat to something that is colder. Ice? Sure! Putting ice into a drink introduces matter with low levels of energy. The energy from the warm soda flows into the ice. The result is lower energy in the soda—it cools off. Eventually, equilibrium is reached with all of the ice is melted (but then the high heat energy from the room starts to flow in low heat energy of the soda). 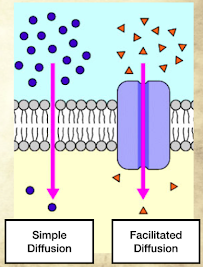 Understanding diffusion benefits from understanding solutions, but we'll get more formally into that later on.  But, previewing, think of a solution as water with stuff dissolved in it. (Like sugar dissolved in water.)

Diffusion deals with the particles (the stuff) dissolved in the water moves from where there's a lot of them to where theres not many of them.

When will passive transport stop?

Okay… let's think about this…
If solutes freely flow to an area of low concentration, what is preventing our cells from being flooded with random stuff?
Our cell membranes are selectively permeable (aka semipermeable), which means that they choose what comes in and what doesn’t. This is the key characteristic in being able to regulate entry and exit of materials. This protects our cells from swelling or shrinking. 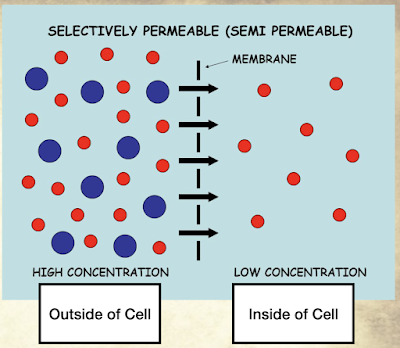 Notice how the blue molecules are unable to move into the cell on their own. This is probably because they are too large. If the cell needed blue molecules, how would it let them in?
For the blue molecules to pass through the cell membrane, some sort of facilitated diffusion would need to occur.
So, diffusion and facilitated diffusion account for two types of passive cellular transport. There is one more.
Osmosis
Osmosis is pretty much the opposite of diffusion. Whereas in diffusion, the particles move from place to place to even out concentration, in osmosis, water moves from place to place to even out the concentration.
To get to a formal definition, we need to learn a few concepts related to solutions.
A solution is a mixture of something dissolved into something else. The thing that dissolves is called the solute and the thing into which it is dissolved is called the solvent.
Sugar water is a mixture of the solute sugar in the solvent of water.

Solution: a homogeneous mixture of a solvent and a solute.

"a solution of ammonia in water"

Solvent: a fluid into which other substances can be dissolved.
Solute: a substance that is dissolved into a solvent to form a solution.

Osmosis is the process whereby the solvent moves such that the concentration of the solute is evened out.
Osmosis will occur passively when the concentration of the solute is relatively different inside a cell as compared to outside the cell.
Osmosis is related to another concept called Tonicity.
Tonicity
Tonicity can be defined as the ability of a solution surrounding a cell to cause that cell to gain or lose water. Tonicity is a measure of osmotic pressure between two sides of a semi-permeable membrane.
To understand this, here are a few things to keep in mind.
Water will naturally move from a high concentration of water to a low concentration of water (osmosis). From a different perspective, water will move to where there is more solute.
Look at the image above.
In the first case, there is a lot more water in the left compartment, meaning that the percent of water compared to solute is higher than on the right. Water will, by osmosis, move into the right chamber so that the concentrations even out.
When water moves to an area of more solute, it dilutes (dissolves) solute molecules.
We have names for different relative concentrations. And we get to use some fancy prefixes!

There are 3 kinds of solutions: 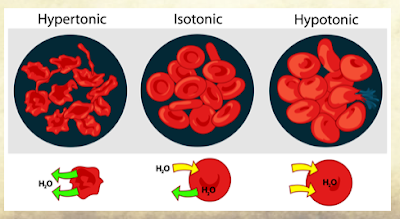 The <stuff> is the solute… something like sugar or salt or another substance a cell needs. The solute is the particles, whatever they are.

The <liquid> is the solvent… water. Let's just leave it at that. So the solute is dissolved in the solvent to create a solution with some concentration.

The <membrane enclosed thing> is usually a cell, but the concepts apply to larger structures. Going forward, we'll limit the concept to cellular passive transport. 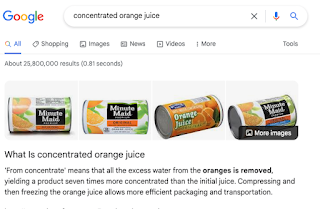 Concentration is a concept that describes how much solute is in a solvent: how much stuff is in a liquid. For instance, how much sugar is in the water. The less water (as compared to the other thing) the higher the concentration

Sometimes to ship products (like orange juice) the liquid is removed leaving highly concentrated product. Putting water back in can return it to its original consistency.

For passive cellular transport to happen, the concentration of solute has to be different when inside and outside is compared.
__________________
Diffusion:

In diffusion, the particles move

•  Solutes will move from high concentration of "particles" to low.

•  The solute moves in order to even out concentrations.

In osmosis, the solvent move

•  Solvents will move from low concentration of "particles" to high.

•  It is conceptually okay to think of the solvent moving from there there's too much solvent to where there's not enough. However, the end result is equalization of concentration, which is a measure of solvent in solute.

•  The solvent moves in order to even out concentrations.

Posted by Bill Snodgrass at 7:11 AM