Where are we going with this? The information on this page relates to the skills needed to investigate and evaluate the graphical and mathematical relationship (using either manual graphing or computers) of one-dimensional kinematic parameters (distance, displacement, speed, velocity, acceleration) with respect to an object's position, direction of motion, and time.
Overviewing Vectors
(Oh brother! What now?)
The study of objects in motion and forces acting upon them relies heavily on using vectors. Thus, having an understanding of vectors is very important. So… we should talk about this…
A vector is a concept connected to quantities that specifies a magnitude and a direction.  Answering many physics questions about the world around us best done by using vectors.
Understanding by example…
Whereas distance traveled is just a number and a distance unit… The race car driver drove 500 miles to win the race… displacement is a number and a distance unit AND a direction.

The boxed changed position ( ∆x ) by a magnitude of 20 m and in the direction of left.
Working in 2D motion, the concept of vectors was assumed when positive and negative values were assigned to thing happening in opposite directions. When motion was to the right and acceleration was to the left, their magnitudes were given different signs. Likewise for up and down.
EXAMPLE 1
Working with Directions on the SAME line.
A ball with an initial velocity of 9 m/s is thrown directly upward on a planet where acceleration due to gravity is 3 m/s2. How long will it rise before stopping?
Solving this is simple (making it a fitting example):

Before solving, we need to "vectorize" the quantities. What's positive and what's negative? So… 2nd round…

Not done yet… We need get the directions worked out so that we can math them! It's a nit that we usually do mentally, but… 3rd round…

Find t
Where up is positive

Now, we can solve… easy!

While that solution is relatively intuitive (up and down are in opposite directions; naturally, the ball will slow down), others (that will emerge in more complex situations) require the rigor of the formality in the 3rd round.
Moving on into 2 dimensions, we'll stick with displacement as the quantity…
EXAMPLE 2
Pizza Delivery Route as Vectors 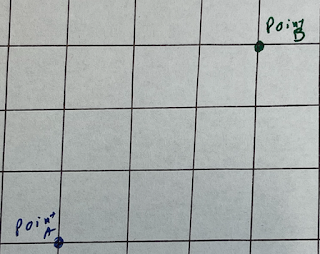 Suppose a city laid out in perfect blocks (like graph paper where the lines are roads).
Okay, at point A is some dude or dudette who wants to get to point B. To do so, travel must result in TWO displacements (ish… Just hang in here as we develop the concept.)
The TOTAL displacement to the right has to be 3 blocks.
The TOTAL displacement up has to be 3 blocks, also.
Okay… suppose…
A pizza deliver robot is at point A. It sets out to delver a pizza by moving as follows:

Does it reach the customer at point B? 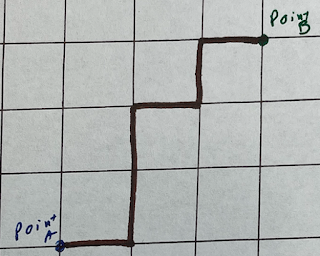 If you trace the path, you'll find out that, indeed, the pizza was delivered!
Okay… Let's ruin this…
Think x axis and y axis… meaning that (normally) right is positive and up is positive.
So, the total displacement is the total change in position… Let's go with
∆P
Therefore conceptually
∆P = ∆x + ∆y (ish, not exactly, but we're getting there…
So, ∆x is how much did it move on the x axis. ∆y is how much did it move on the y axis.
Let's grab those movements from above… and sort them…

So, the total motion is (sticking with intuition, not formal math)

Component vector: Any individual vector having magnitude and direction within a given frame of reference.
Component vectors can be combined into a resulting vector (or the resultant vector).

What if you start with the resultant? Yeah, that can happen!

A resultant vector can be broken down into its component vectors.

Now, some caveats… common sense that needs to be outed…

While we can say that the total displacement is…

3 blocks right and 3 blocks up

Woh… that got mathy fast!

or we could say:

The resultant vector is some magnitude at some angle to the x axis.

Using the Pythagorean theorem, the blue line has a length that is the square root of 18. Geometry tells us that the angle of a triangle with two equal sides is 45°.

Enough, already… really! What happened to the pizza?

6. Many different paths to deliver the pizza can end up at the same place. The robot could go 10 to the right, 10 up, then 7 left and 7 down. The sum of these component vectors would yield the same displacement:

EXAMPLE 3
The 1100 mile per hour pitch.
In this example we are emphasizing the frame of reference. And… the math will be scant… so…
A really good baseball pitcher can hurl a ball at around 100 mph.
The earth rotates, completing approximately 24,000 miles in approximately 24 hours; hence, a point on the surface of the earth has a velocity of 1000 mph.
So, some alien orbiting the sun at the same rate as planet earth is looking through a telescope tuned to ONLY see the baseball.
From the frame of reference where the sun is not moving, then the velocity of the baseball (if thrown with the rotation of the earth is the sum of the pitch plus the velocity of a point on the surface of the earth.
Back up some… The sun is moving through the galaxy which is moving through the universe. Assuming that the universe is not moving, the velocity of the baseball is the sum of…
the pitch
the rotation of the earth
the motion of earth around the sun
the motion of the sun moving through the galaxy
and the motion of the galaxy through the universe…
Each of those component velocities could be added together to find the resultant velocity of the baseball.
Posted by Bill Snodgrass at 4:35 AM