Where are we going with this? The information on this page should increase understanding related to this standard:  Identify chronological patterns of change and communicate that biological evolution is supported by multiple lines of empirical evidence that identify similarities inherited from a common ancestor (homologies). Use information about species to classify them. 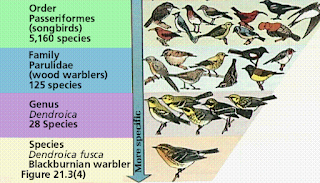 Classification
(This should organize things, right?!)
With so much diversity of life, there is a value in grouping things together.
"Living things are all around us. You know that humans and animals are living, but what about the trees in the forest or even the microscopic organisms in a pond? Even though they appear to be very different from one another, they are all living things as well. Scientists study these differences and classify, or group together, similar living things based on their unique characteristics.
Living things are classified into groups that start out large and become more specific as living things are grouped together that share similar characteristics. This makes it easy for scientists to study them. This system of classification is called taxonomy. Scientists classify living things at eight different levels: domain, kingdom, phylum, class, order, family, genus, and species. In order to do this, they look at characteristics, such as their appearance, reproduction, and movement, to name a few" (Source, 2022-03).
There are two main methods of classifying organisms.
Cladogram
A tree-like diagram that shows evolutionary relationships among organisms is called a cladogram. 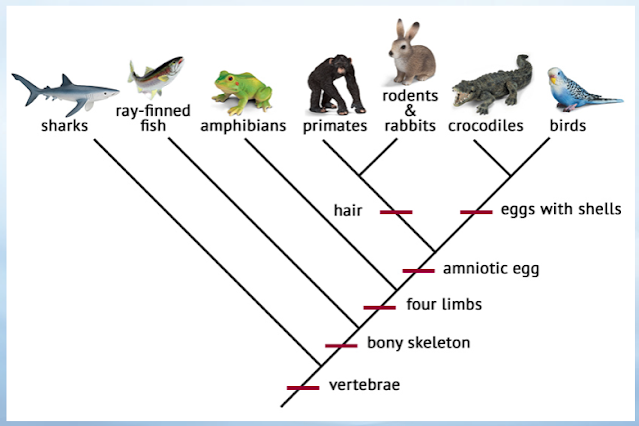 A dichotomous key is a step-by-step guide to identifying an organism based on certain characteristics. "A dichotomous key is an important scientific tool, used to identify different organisms, based the organism’s observable traits. Dichotomous keys consist of a series of statements with two choices in each step that will lead users to the correct identification" (Source, 2022-03). 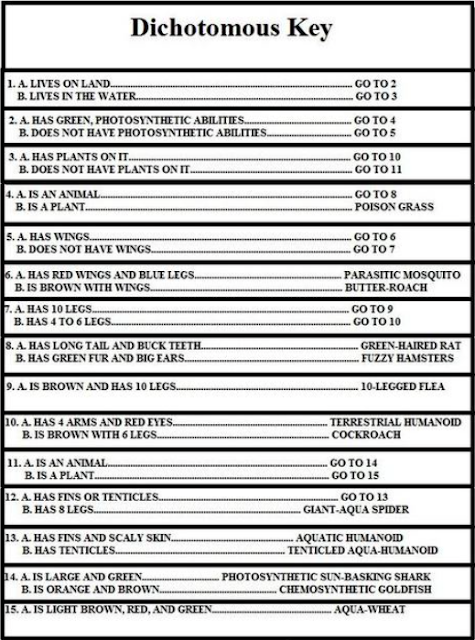 The science of classifying organisms and assigning them universally accepted names is called taxonomy. 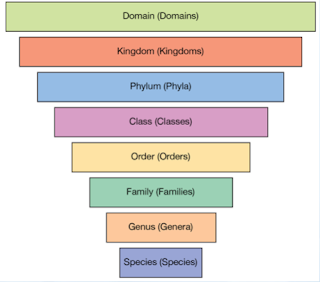 A group or level of organization in taxonomy is called a taxon.
There are 8 taxons.
The taxon, "Domain" is a relatively new addition to they system.
There are several mnemonics to remember the system:

We can use the taxonomy to identify closely related species. The more of the taxons they share, the closer they are in relationship. 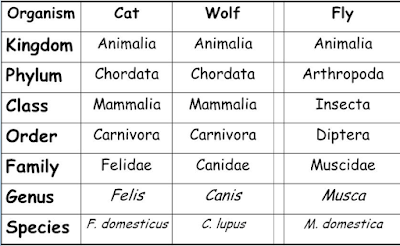 Look at the chart to the right.
Of the three species listed, which are most closely related?
Cats and wolves share Kingdom, Phylum, Class, and Order. The fly, branches away at Phylum.
A dog and a wolf would share more. In fact, "for years, wolves and dogs were considered separate species: canis familiaris and canis lupus. However, more recently, scientists generally agree they are both a subspecies of canis lupus. Unlike dogs and foxes, wolves and dogs can reproduce, creating the controversial wolf-dog" (Source, 2022-03).
Dogs and foxes would branch at the Genus level (foxes are genus Vulpes). So, dogs are closer to wolves than they are to foxes.
At the top of the taxonomy system is the taxon Domain. There are three domains. 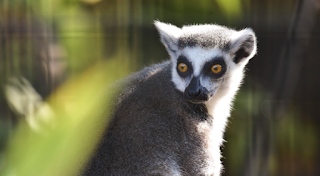 Kingdom Plantae consists mainly of plants, mosses, ferns, etc. There are cell walls and chloroplasts. This falls under Domain Eukarya.

Kingdom Fungi consists mainly of fungus that has cell walls made of chitin. This falls under Domain Eukarya. 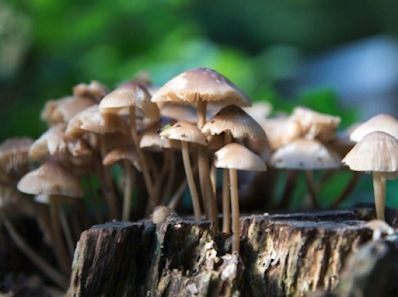 Kingdom Eubacteria consists mainly of bacteria and have specialized cell walls made up of peptidoglycan. These are the bacteria you commonly think of. This falls under Domain Bacteria. 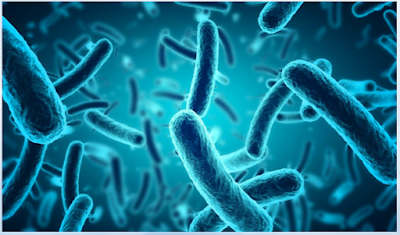 The main differences between Eubacteria and Archaebacteria are:

1. Location (eubacteria are everywhere; archaebacteria are only in extreme conditions)
2. Cell wall composition

So… how do we talk about a species without all those other taxons getting in the way?
There is a two-word naming system used for organisms is called binomial nomenclature. It was developed by Carl Linnaeus to abbreviate precise naming.
It is always written in the format Genus species. It is always italicized or underlined. The Genus is always capitalized and the species is never capitalized. Examples are Homo sapiens or Hemophilus influenzae.
To sum it all up…
Posted by Bill Snodgrass at 4:27 AM