Cycles of Matter in Ecology 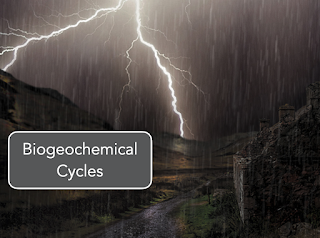 Cycles of Matter in Ecology
(Life is a merry-go-round?)
The Law of Conservation insist that matter can neither be created nor destroyed; rather, it only changes forms. So, where does the rain come from? If plants, in a remote jungle without human interaction, use up the nitrogen in the soil, how does more get there?
Nature handles this! There are several cycles of matter within nature!
The Water Cycle
"The water cycle shows the continuous movement of water within the Earth and atmosphere. It is a complex system that includes many different processes. Liquid water evaporates into water vapor, condenses to form clouds, and precipitates back to earth in the form of rain and snow" (Source, 2022-03). 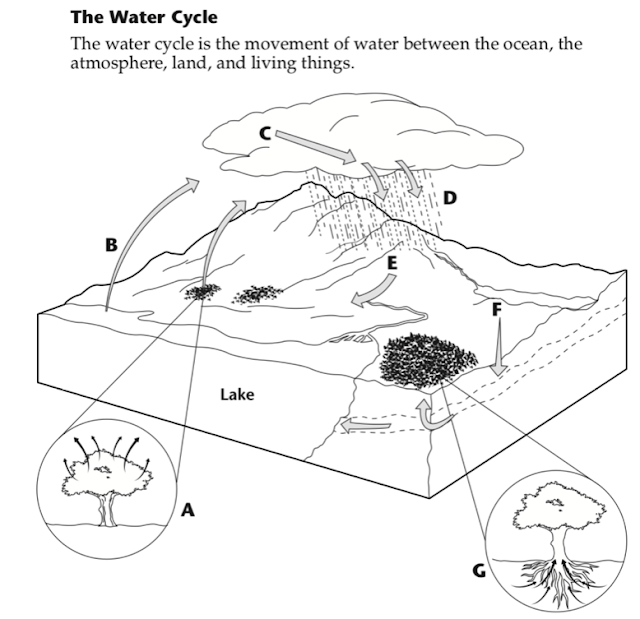 Runoff into the ocean produces nutrient-rich coastal waters.
This causes coastal waters to be more productive in terms of energy. 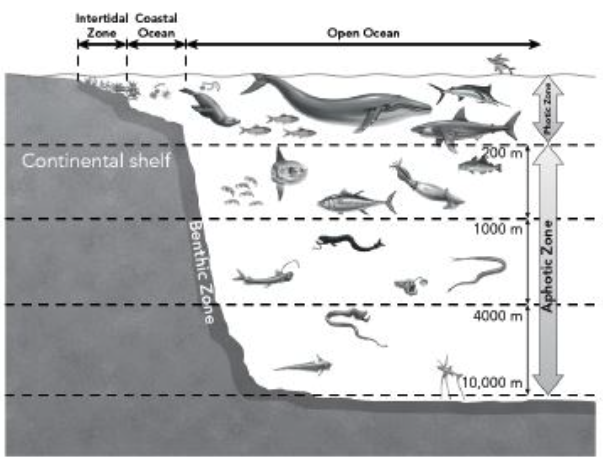 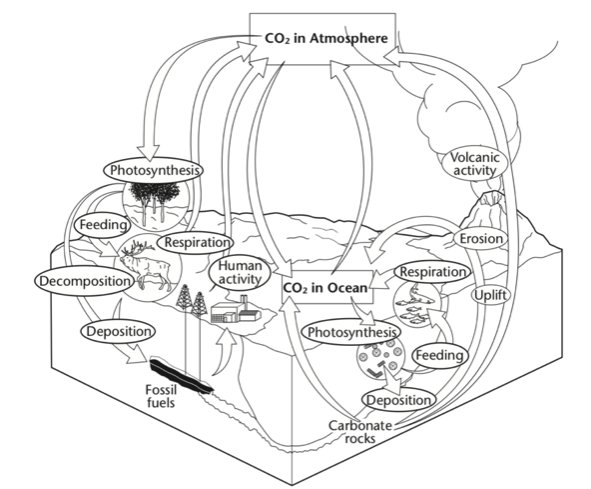 Look at the image above and answer these questions:

The Nitrogen Cycle
The nitrogen cycle is a repeating cycle of processes during which nitrogen moves through both living and nonliving things: the atmosphere, soil, water, plants, animals and bacteria. Microscopic living organisms that usually contain only one cell and are found everywhere. Bacteria can cause decomposition or breaking down, of organic material in soils.. In order to move through the different parts of the cycle, nitrogen must change forms. In the atmosphere, nitrogen exists as a gas (N2), but in the soils it exists as nitrogen oxide, NO, and nitrogen dioxide, NO2, and when used as a fertilizer, can be found in other forms, such as ammonia, NH3, which can be processed even further into a different fertilizer, ammonium nitrate, or NH4NO3.
(Source, 2022-03)
The nitrogen cycle describes how nitrogen moves between plants, animals, bacteria, the atmosphere, and soil in the ground. 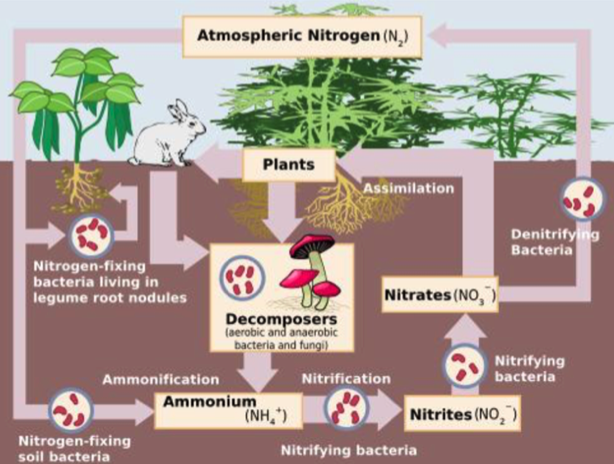 For nitrogen to be used by different life forms, it must be changed into different states.
The nitrogen found in the atmosphere is N2.
Other forms of nitrogen used are:
There are 4 important processes that occur during the nitrogen cycle:

One way nitrogen can be aided in entering a plant is through lightning storms.
The Phosphorus Cycle
"The Phosphorus Cycle is the biogeochemical cycle that describes the transformation and translocation of phosphorus in soil, water, and living and dead organic material" (Source, 2022-03). 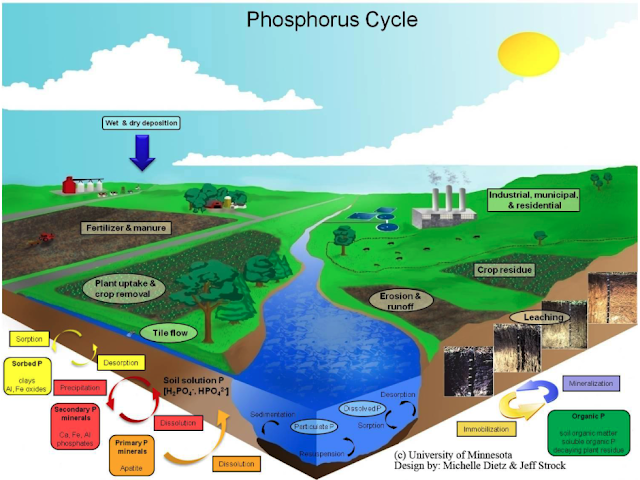 Phosphorus is mostly contained in rocks and minerals. Phosphorus is an essential nutrient for life as it makes up parts of DNA.
In the phosphorus cycle, phosphorus moves between the soil and plants. The animals use phosphorus, and then their waste products help return it to the soil.
Some of the phosphorus in soil can be washed away into water basins. Another source of phosphorus in water comes from man-made pollution. 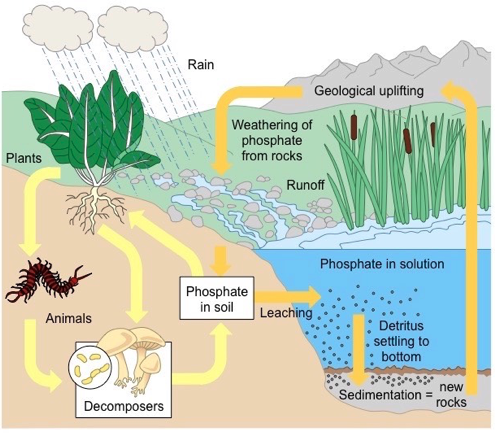 Too much phosphorus in water can lead to plant overgrowth which essentially strangles all other life forms in the water. 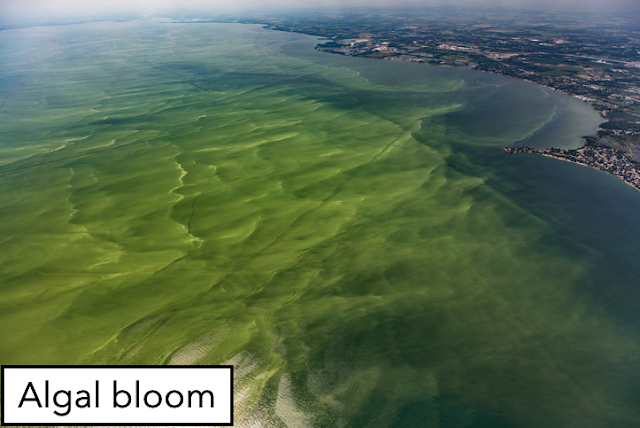 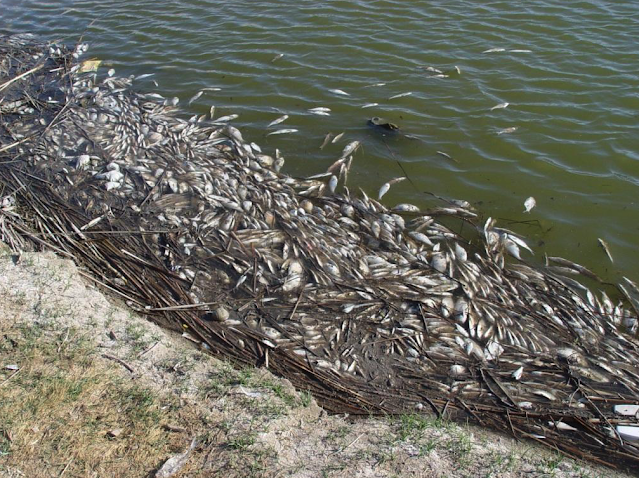 Bottom Line:
Phosphorus is trapped in rocks and released when rain (which can be acidic) erodes the rocks.
Posted by Bill Snodgrass at 5:31 AM