Where are we going with this? This page will give the ability to use laboratory observations and data to compare and contrast ionic, covalent, network, metallic, polar, and non-polar substances with respect to constituent particles, strength of bonds, melting and boiling points, and conductivity; provide examples of each type.
London Dispersion Forces
When atoms get a little clingy… 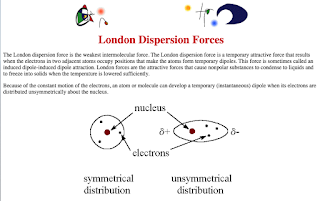 London dispersion forces result from intermolecular attraction between compounds resulting from the occasional, random non-uniform distribution of electrons as they move around.
"The London dispersion force is a temporary attractive force that results when the electrons in two adjacent atoms occupy positions that make the atoms form temporary dipoles. This force is sometimes called an induced dipole-induced dipole attraction" (See More).
Posted by Bill Snodgrass at 10:41 AM